Car Dent Repair All by Yourself

It is every driver’s nightmare to see their cars with dents. Fact is, it could not be avoided. No matter how careful you are as a driver, there would always be times wherein your vehicle gets dings and dents. Then, logically, your next step is to visit your nearest shop and have it fixed but did you know that you could do something about it, all by yourself? This article will give you tips as to how one could make the dented car look as good as a brand new one.

First thing that you’ll do for car dent repair is to assess the damage. There are dents that can be tapped or popped back out as long as it’s not crumpled or creased the metal. One could actually tell just by looking at the dent. If you could not see any ripples or bumps in the metal that would look partially folded then you could fix it yourself. 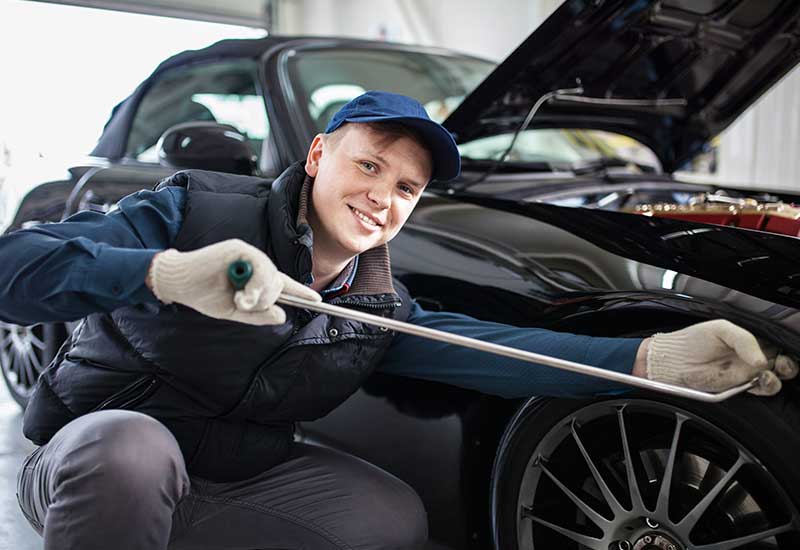 If you’d like to get best results, before starting to fix it, do wash that portion of your car to make sure there is nothing that would interfere with your tools and allow for a good seal that is if you’re going to do a suction method to get rid of the dents in your car.

There is actually an easy way to remove a dent and that is through the help of a common plunger. All you need to do is apply the plunger over the dent, press in a slow and steady way until air could escape and you can see a tight seal between the panel and the rubber head of the plunger.

There is another method that could be used and this is the tapping. For this method, you will need a rubber mallet, an old towel and a block of wood. Then, just wrap the towel around the block. This would lessen the risk of scratches in your paint. Next is to take the block carefully and lay it against the metal on the opposite side of the panel. In order to get best results, just take your time in doing it and when you strike the wood, make it a point that you’ll hit the flat surface.

Repairing your car dent is not always recommended though because of the skills it requires. If you can do all of these methods without bringing more damage to your car, then okay. But if you are not sure, better hire a mobile paintless dent repair company such as Dentmaster Whales. They come to you and fix your dents in a matter of hours, even less than an hour if it’s just a minor one. The charge is substantially lower compared to conventional repair shops plus the output is almost of the same quality.

Would defiantly recommend
on 10, Feb 2017
Did a repair on my machine cut alloys came to my house were honest before they started that as it was a machine cut they could do a repair but not exactly match the finish well iI defy anyone to spot the repair it is an excellent job would defiantly recommend
John Carter
from Cardiff
Good value for money.
on 27, Mar 2017
Repaired two alloys for me. Great work carried out, friendly and fun service from the two gents and good value for money. I would definitely recommend.
Dave Williamson
from Cardiff
Great service
on 07, Jul 2017
Great service, work and guys. As an accident prone driver I will definitely use them again!
Hannah Thomas
from Swansea
Highly recommend!!
on 07, Oct 2017
Highly recommend!! Great job on a bumper repair, very professional service
Sarah Robey
from Cardiff
Very pleased with the work done
on 18, Oct 2017
Very pleased with the work done by Carmond. He managed to come out to do the work the day after I contacted him. Disguising/repairing a cigarette burn on the back seat. Looks good as new and at a reasonable price. Would definitely recommend. Very helpful and great friendly service.
Megan Kerswell
from Cardiff
No hassle
on 30, Oct 2020
Quick response, helpful and friendly. Sorted a minor dent in my rear passenger door with no hassle. Problem solved – thanks very much!
Hazel Philips
from South Wales
Extremely knowledgeable
on 02, Sep 2020
Thanks Steve and Carmond for the great work on my Defender and E class. Both extremely knowledgeable, providing guidance and best options. Would highly recommend.
Joe Sultana
from South Wales – Cardiff
Superb, informative and friendly service.
on 09, Oct 2020
Thank you for sorting my dent from another car door! Superb, informative and friendly service. Definitely recommend these guys. Thank you again!
Jane Burnett
from South Wales
Highly recommended
on 16, Oct 2020
Excellent service, high quality repair, happy customer, highly recommended
Shelly Jones
from South Wales
Would highly recommend
on 08, Oct 2020
Would highly recommend Services, quick, efficient, reasonably priced & 10 out 10 workmanship.
Jamie Hurford
from LLanharran South Wales
Highly recommend
on 05, Jun 2020
Highly recommend came out this afternoon to remove some very awkward dents on my vehicle. Extremely happy with the results and now as good as new Thank you
David Lewis
from South Wales
My mum was delighted with the results.
on 12, Oct 2020
They came to help my mum with a small dent in her car. The men who came were respectful and polite. The job was completed very efficiently and my mum was delighted with the results.
Kathryn Dyckhoff
from Bridgend
Professionals and genuine
on 14, Oct 2020
Both Steve and Carmond are top top blokes! Professionals and genuine boys to work with. Keep up the good work! B
Bilal Varma
from South Wales
What an amazing job
on 11, Aug 2020
What an amazing job, quick and professional and the standard of service is excellent
Amelia Anne Gibbs
from South Wales
Very helpful
on 30, Jul 2020
Very helpful. Repaired the small bump on the door of my new car quickly and efficiently and economically. Would highly recommend and in fact have already passed their details onto neighbours.
Judith Robertshaw
from South Wales
I would recommend them to anyone
on 24, Mar 2020
I booked Steve and Carmond to repair a small dent in the passenger side door of my focus, and they really did an excellent job. I would recommend them to anyone. Great job guys!
Ian Jones
from South Wales
My car looks good as new
on 21, Sep 2020
Fantastic service and a fantastic price! Would recommend them to anyone! My car looks good as new and it was completed in under an hour! Thank you guys!
Carla James
from Caerphilly
Call Us Now!