Dents in cars and other vehicle happen when there is an accident or one accidentally creates one. It is not a good sight to see, and it surely lessens the attractiveness of a vehicle. Most car owners would want to see their cars dent-free. However, it would be very interesting to know how such dents are removed from our own vehicles. Maybe if we know enough, we can do it ourselves. Besides, having a dent repairs are an additional expense that one might not be able to make.

Dents are usually treated by the degree of the dent made. The minor ones are easily treated while the huge ones sometimes need a total replacement of a part of the vehicle. Small dents can be easily removed by massaging, pressing or hammering the dented area, until it goes back to its original shape. But the huge one, especially if the paint was scratched is much more difficult to treat.

There are also easy steps that we can follow is we want to fix the dent on our own car. All we have to do is observe first is to observe such a process first-hand so that following a guide wouldn’t be so hard to do. 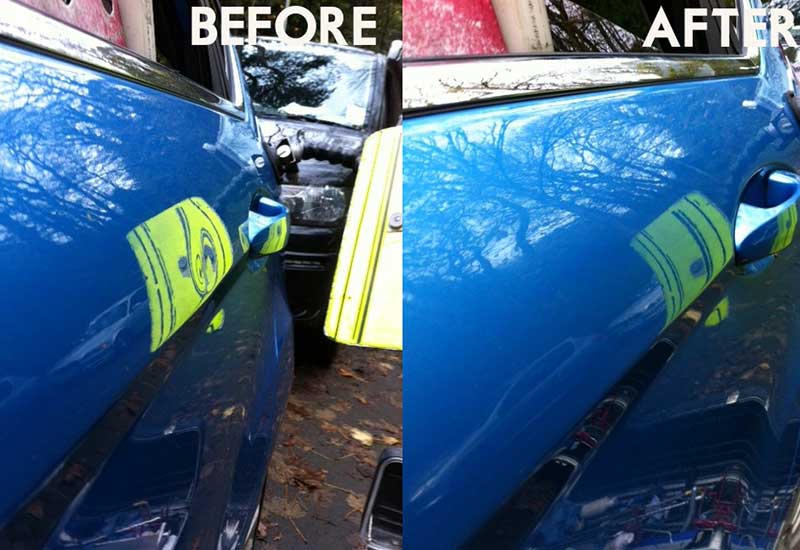 Before, starting anything of course, we must prepare all the materials that we might need in repairing the dent. We will need hammers, a block of wood, electric drill, ball-pen, self-locking grips, screws, sanding paper, body filler kit, rags, cellulose body stopper, wire brush, drill bits, claw hammer. After preparing everything, we must then try to push out the dent first with our own hands. If it doesn’t work we can place the block of wood on the outside and hammer the dent from the inside. However, if it still doesn’t work, drill the center of the dent and screw it allowing half an inch of the screw to stick out. Then, grip it with a claw hammer or a pair of self-locking grips. Remove the paint from the dent and use a spatula in applying the filler into the dent. After the filler is hardens shape it with a rasp. Then, use a sanding paper to make the shape finer. Make sure to feel for any imperfections with the filling before starting to paint it.

Dent repairs require a great deal of patience and an eye for details. However, the process is well worth the hard work. Besides, it will save us the money we might have spent for dent repairs. But of course, this savings is in the presumption that you are skilled and you really know how to repair car dents. If you’re not or you’re not sure, well, better hire a mobile dent repair company such as Dentmaster Wales who employs Dentmaster repair specialists, before you do more damage to your car. No need to worry about costs because they will only charge you with substantially cheaper rate than usual repair shops. Plus with added convenience since they will come to you! In less than an hour, job gets done.